Land In Her Own Name

I believe “the sins of the father” are a very real thing, passed down as trauma from one generation to the next, but what about “sacrifices of the mother”  do these equally effect our bloodline?

As I look at my own history I think about the damage patriarchy had on my great-grandmother, my grandmother and my mother.  Women who were wedged into a role, but each of them strong, fierce and fiery souls in their own regard.  What glory could these three women have unleashed had they been free to let their passions roam wild and free?  Unencumbered by a system of rigidity and domination.

The mother of my childhood was broken, wounded and silenced into her predicted choices – coming from a strict, spiritually abusive Baptist cult.   Where religion and regulation were the name of the game.  As I lament my mother’s forced choices, her lack of freedom, her fear and confusion – I pause and express gratitude – beyond the shame  she tried to transfer onto me thru years of criticism and control.   No, Enemy – you will not use my mother to shame me.

“Never be dependent on a man.  Always be able to have a job and make money so you can provide for yourself.”

“Pick a college that’s far away.  I’m so proud of you for getting out of here, go be free.”

These moments of vigor and snippets of life in her words were few and far between.  Glimpses of my mommies true heart – a heart that was never stained by the blood of patriarchy and abuse.  Fractures of the woman she was always meant to be…maybe she shut this heroine’s mouth because she was scared her salvation was dependent on staying married, maybe she was too afraid to leave not knowing if she could support herself and her children, and worse – choosing to stay and protect her image within a hierarchy of generational abuse.  I pause and I lament for the lost parts of my mother’s soul.

In one particular moment of liberated sanity – while on vacation my mother bought me a book.  It’s an older book called “Land in Her Own Name” by H. E. Lindgren.

It tells true accounts of  women who purchased land in South Dakota at a time in history when it was illegal for women to buy property, own shares separate from their husband, or take charge of their own earnings.  As she took this book off the shelf and handed it to me she said, “Women were not allowed to buy property – but these women did”.  The message I received that day, as a 12 year old girl was, “Rochelle, you will learn to take care of yourself, you will not be dependent on a man, you will provide for yourself.”

My mom, inadvertently,  taught me to be a feminist.  As I ponder my own rights as a woman in this country, I couldn’t help but take some time to consider the fight for justice that women before me have taken.  Their energy, work and uprising against patriarchy and oppression has become part of the wind in my sails.  Here are a few things I have learned about women’s lack of rights both past and present:

And it doesn’t end there in historical law and sexual violence:  Women today in the church are just as oppressed, specifically by men who use the Bible – the sacred word of God to condone their abusive behavior.  Men in “ministry” can bully, demean, control, slap, choke, and manipulate all while claiming their behavior is biblical.   In an article from Relevant Magazine Emma Jarred states,

Two thousand years later and we’ve gone a bit backwards, using Scripture taken out of context for the justification of sin. We have become tolerant and supportive of a doctrine which is inaccurate at best and theologically dangerous at its worst. Maybe it’s not explicitly spewed from the pulpit, maybe there aren’t women being treated badly inside the church on a Sunday, but this theology is hurting lives where we cannot imagine, inflicting damage we can’t see.

It can be used by abusive men as an excuse that their behavior is condoned by God. It can nudge women with a gifting in ministry to see their abilities as merely a watered-down version of what God gave men. It can leave out single women and those who cannot have children. It can silence women who want to speak up. It can constrict churches and fellowships and movements to half the resources God gave them. It can raise a generation on sexist ideologies. For centuries, it has been used as justification for the mistreatment of human beings. https://relevantmagazine.com/current/equality-women-start-church/

Even through these monstrosities that are made to keep women small and silent – FEMININITY STILL uses its voice to fight for equality.  One small group of women beautifully petitioned their government with a statement that began;

“We come to you believing in our CREATOR, believing that he endowed us with the Image of God and created us equal.  We cannot but wonder and grieve that we should appear so despicable in your eyes as to be thought unworthy to petition… have we not an equal investment in this nation with it’s liberties and securities?”

These words so poignantly ring true in the year 2020 not only for myself as a woman, but for my black, brown, mixed and indigenous sisters.   We still fight with our feminine voices- given to us by our Creator and I believe, one of the most influential voices in the world is that of a woman’s.

In Psalms, David describes when the Ark of the Covenant was moved in procession.  The army had just won a battle and it says, “The Lord announces the word, and the women who proclaim it are a mighty throng:”-Psalm 68:11  You see, it is the women who bring truth to the people … another translation says “a great company of women brought the good news”   Historically, it is our birthright to proclaim goodness, righteousness and TRUTH to our families and villages.  What better way to do that than to use your voice as a woman for your freedom and the freedom of others?

I am still on the journey in allowing Jesus to re-frame, heal and redeem my femininity from the wounds of abuse. Today, I proclaim my own justice!  Today, I purchased land in my own name.  Today, I marked a victory by turning my key in the lock of my new house  – knowing that this is a property which will serve and fight for the freedom of others.  It is a property, in my own name that will be a symbol of redemption and justice. 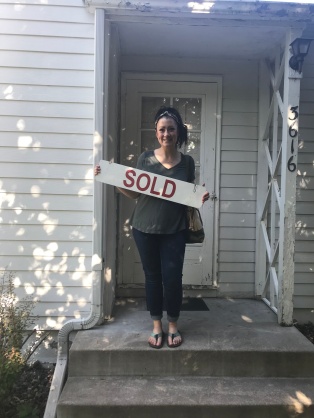 I cannot fix all of the world’s inequalities – but I can start here – in the little white house on Orchard Street – the little house of hope.

“If you are generous with the hungry and start giving yourselves to the down-and-out, Your lives will begin to glow in the darkness, your shadowed lives will be bathed in sunlight.  I will always show you where to go.  I’ll give you a full life in the emptiest of places – firm muscles, strong bones.  You’ll be like a well-watered garden, a gurgling spring that never runs dry.  You’ll use the old rubble of past lives to BUILD ANEW, REBUILD foundations from OUT OF YOUR PAST.  You’ll be known as those who can fix anything, restore old ruins, rebuild and renovate, make the community livable again.” -Isaiah 58:9-12

Keep on fighting for your freedom, Sister.

You are not alone.